Now for a review on something a little left-of-field. More often than not at Unsealed 4X4, I’m the designated tech-head, so I get to put some of the best quality gear from the biggest brands to the test. But sometimes we like to break the mould a touch and have a swing at something way out of left-field. Enter, the DC Battery meter from the folks over at Sales67.

How this whole thing came about was when I was having a conversation with a bloke from Western Australia on a random internet forum about digital ammeters, and how there are few options floating about that just give amp draw, voltage and some sort of State of Charge (SOC) information. Something that is accurate, cheap and is essentially a stand-alone product. If you’ve got a full Redarc Manager system or an ARB LINX setup, this probably won’t be of much interest to you, but if you’re after something ‘cheap’ that just feeds the information you want, like I did for the back of my HiLux canopy setup, then this could be a handy solution. 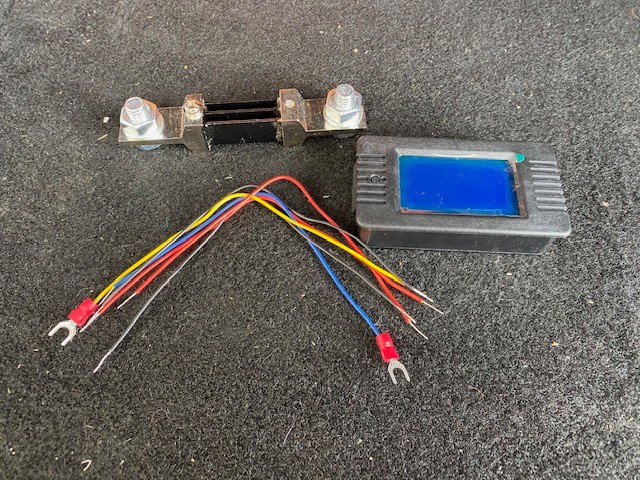 So the bloke I was chatting to, Chris at Sales67, explained he had a digital ammeter that would tick all the boxes and maybe a couple more, and at a proper-cheap price. I’m talking less than 40 bucks cheap. Despite the price, this unit has been tested on a Fluke lab-spec power supply and proved accurate. This led me to spending the required $36 and having one delivered from WA to my place on the east coast, and a little bit of testing ensued.

This ammeter is, in a word, magic. For the price I paid it provides all the information I wanted out of an ammeter, in a tidy rectangular package that cost near-enough a 10th the price of some of the other gear you’ll find online. The DC battery meter shows amp draw, battery voltage and has a nice SOC meter that works off the voltage of the battery. The kit includes a 300-amp shunt that proved simple enough to connect up, a few 100mm long wires to connect it, and the meter itself. In addition to the above information, the meter also provides you with current in watts, watt-hour usage, impedance of both the current drawn and battery, and how long the system has been running for.

Set up is fairly straight forward, with just the need to set the high and low limits for the SOC display, and the meter itself is self-ranging, so it will show milliamps all the way up to 300 amps across the meter. If you’re running on a 24-volt system, it will work just as well, all the way up to a 200-volt system.

Ignore the spaghetti wiring, I just lobbed it together to test it out..

To mount it on the electrics board in the back of the HiLux, I just needed to run some new 4-core cabling from the shunt on the battery, and the positive and negative poles to the back of the unit itself. I did this with an old computer networking cable I had lying around, as the Cat5 cables are 8-core and the wiring is purely for signals; next to no current goes down the cabling to the unit, so the small wiring is fine. From there it was just a matter of fusing the positive wire that went to the battery, connecting the shunt to the negative terminal and it was all done and dusted.

So, if you’re looking for an ammeter that won’t break the bank, and will just do one specific job well, this could well be the thing for you.

It’s worth noting there are more advanced ammeters out there, and many higher-end DC-DC systems come with their own built-in ammeter, such as the Redarc Manager 30 system and the ARB LINX system. That said, I’ve got a Redarc DC-DC charger (with solar controller) and the rest of my 12-volt setup consists top-brand gear, but if you’re just after something that’ll get the job done with no fuss (on the cheap), and you’ve already got the rest of your DC-DC charging system sorted (like I do), this could be the DC battery meter for you.